The Council for Medicare Integrity

The Council for Medicare Integrity

Westfourth Takes on The AHA, Solidifies the Positive Reputation of Medicare Integrity Contractors and Demonstrates Continued Success of Auditing Practices

For several decades, Medicare has been hemorrhaging funds due to wasteful spending. As a result, in 2006, Congress mandated the creation of the Recovery Audit Contractor (RAC) program to review Medicare records, identify billing errors and recover misused taxpayer funds. The Centers for Medicare and Medicaid Services (CMS) contracted with four RAC companies in 2009, formally launching the new Medicare integrity program. The RAC program quickly came under fire from the hospital community, which had not previously been audited or been required to return overpayments they received back to the Medicare Trust Fund.

In an effort to demonstrate the importance of their work to Medicare’s financial future, the four RAC companies approached Westfourth to develop a new, branded, 501(c)6 coalition to publicly represent the interests of the integrity contracting industry. Our team built the Council for Medicare Integrity (CMI) brand, formulated its messaging and media strategy, and launched a multi-channel advocacy campaign focused on the importance of reducing Medicare waste.

For the past seven years, our team has been implementing ongoing and aggressive media tactics to educate policy influencers and consumers about the importance of Medicare oversight – with the objective of changing the public perception of Recovery Auditing and driving down the Medicare billing error rate..  Our professionals serve as the national spokespersons for CMI, manage the campaign’s ongoing digital presence, and develop educational collateral materials used by the coalition’s lobbyists on Capitol Hill.

Results:
Today, the coalition is widely recognized as the “voice of Medicare integrity,” dispelling myths about the RAC program and 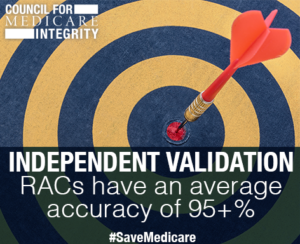 changing the tone of press coverage among hundreds of political, healthcare and mainstream media outlets. In addition, campaign messages shared via Facebook and Twitter have ignited an outcry among consumers about the annual loss of $40 billion from Medicare due to improper billing.  Recent media coverage of the coalition has included articles in the Wall Street Journal, USA Today, Forbes, Congressional Quarterly, Modern Healthcare, The Hill, Bloomberg, Politico, Inside Health Policy and local news organizations across the nation.